I think the general response to the Archbish’s “sharia unavoidable” remark is obviously NO SHARIA HERE! as Pat so eloquently makes clear.

This is going to appear all over England.

This is the rallying cry.

SIOE England has moved to http://sioeengland.wordpress.com

This blog is renamed England Anti Jihad and will cater for the growing demand for more physical "in your face" anti-Jihad activities.

It is obvious that there is a groundswell, not only in England, but across Europe, of people who are keen to combat jihad.

Therefore anti-Jihad sites are being set up in each country. Anti-Jihad will comprise autonomous small groups of the kind already existing in Freedom Fighters of England - so why not do the same? Four trustworthy pals is all it takes.

This is left to people themselves to organise. Obviously trusting your buddies and not shooting your mouths off are essential. Small-cells working alone is how Jihadists work. Anti-Jihadists must do the same.

SIOE is not responsible for anti-Jihad activities, but this site will point to where Jihad is happening in England.

So for regular SIOE reports go to http://sioeengland.wordpress.com
Posted by Stephen Gash at 11:20 2 comments:

Demo mentioned in The Observer

Amsterdam demo gets the go-ahead

AMSTERDAM, 19/01/08 - An action group wants to demonstrate in Amsterdam next Saturday against the 'Islamisation' of Europe, as newspaper Het Parool Friday reported.

The demonstration on Dam square is being organised by Stop Islamisation of Europe, an action group set up by the Danish politician Anders Gravers and British Stephen Gash. They are expecting a turnout of some 300 people. Speeches will be given, including one by Gravers, according to Het Parool.

According to the newspaper, Amsterdam Mayor Job Cohen sees no reason at present to ban or curb the demonstration. The rules of the demonstration state, said the paper, that racist slogans are forbidden, as are flags of extreme right-wing organisations.
Posted by Stephen Gash at 02:42 4 comments:

SIOE Netherlands has organised a demonstration on
Saturday 26 January 2008, at 13.00 on the dam in Amsterdam!
***
WE’VE HAD ENOUGH OF IT! 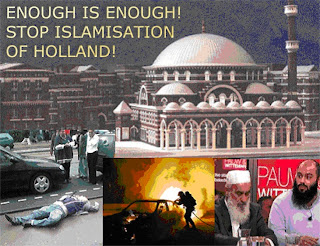 * Muslims demand respect, whereas they do not treat non-muslims with respect.
* Female muslims refuse to be treated by male doctors.
* In Amsterdam cars were set on fire after Bilal near-lethally knifed 2 policewomen. Although the damage was enormous nobody received payment for damages, and the perpetrators have not been caught (and where is the news of how the two policewomen are fairing?)
* The imam of the As-Soenah mosque, said that this mosque can now be built larger than it already is, and he suggested that Theo van Gogh had deserved “sentence” he received.
* On 17 November 2007 muslim students in Amsterdam tried convert others to Islam.
* The photographer Sooreh Hera cannot show her photos of two men wearing masks of Mohammed and Ali. She was threatened and was forced into hiding.
* Geert Wilders, Eshan Jami and Ayaan Hirsi Ali are not able to walk the streets without bodyguards. Several times they have been threatened.
* Islamic students become angry because they are refused time off from studies so that they can ritually slaughter animals for their religious feasts.
* An anti-Wildersb group has been set up to silence Wilders, the only politician who dares to point out the dangers of Islam. The group demands he remains silent.
* Hizb ut Tahrir distributes leaflets saying “stop badgering islam”.
The leaflet which the Dutch department of Hizb ut-Tahrir these spreads week, asks for signatures to place under a petition against the ` offence of Islam and the Moslems. ` Islam is continuously badgered and that must stop, says spokesman Okay Pala.
* Moslems have been offended before even seeing the film of Geert Wilders and threaten violent action (see here to a small film from end courts, where it is suggested that Geert Wilders is decapitated. With thanks to none style)
* Our SIOE colleagues were victims of an assassination attack before attending a demonstration against islamisation. (all of their wounds have meanwhile healed)
* SIOE Netherlands members have been threatened (we have made an official report)
* Homosexuals are threatened and beaten up.
* Jewish people, families, are chased out of Amsterdam.
We can mention many things about what appears in the news. We can all say that muslims are offended every time we say the tiniest thing about the islam. They demand more respect, more tolerance. Our politicians do nothing about it and, indeed, ourpolitically correct politicians from The Hague invariably side with muslim demands. Even our queen (read

SIOE Nederland has enough of this, more than enough and it's time that we all stood together to it make clear that enough is enough.

We won't submit, we won't let them take our freedom away, they will not tell us what to do.

We don't want to live by the rules of islam, in other words Sharia law.

We do have a culture, a culture of tolerance and mutual respect. Nederland is a country founded on freedom. Why should we be forced to give up this hard-earned freedom? Why should we live under the fear of the dhimmis?

We demand our hard-earned our freedom back!


We call for individuals, gay-organisations, human right organisations etc. to come to our demonstration to make a protest together:

* Freedom of speech
* Freedom of expression
* Stop political correctness
* No politically correct dictatorship
* Stop mosque building
* Democracy not theocracy!
* No Sharia here!
* Stop islamisation of the Netherlands, and of Europe


TOGETHER WE STAND STRONG,
COME IN LARGE NUMBERS ON 26 JANUARY 2008
TO THE DAM IN AMSTERDAM

* Totalitarian signs, swastika's, racist language, violence
ARE BANNED.
The police force is informed of this and SIOE/SIOE Netherlands distance themselves from persons who try to spoil our demonstration or use it for their own agendas.


Everyone the that need feels a speech keep, can submit an application by sending a mail to SIOE the Netherlands: sioenederland@gmail.com
To please the speech to send along!


THE MORAL RIGHT LIES AT THE PEOPLE
Posted by Stephen Gash at 20:31 15 comments:

If you would like more information about the aims and objectives of SIOE - please email us at sioe.nsh@btinternet.com

KUFFAR - a pejorative, or insulting, expression used by Muslims to describe a non-Muslim

KUFFARPHOBIA - the irrational fear and loathing of all things non-Islamic and of all non-Muslims.

KALIFASCIST - a person who wishes to establish a worldwide Kalifate by fascistic means. Generally a Muslim, but increasingly also a Western politician who styles him/herself as a "liberal"

Taqiyya - A Muslim concealing or disguising one's beliefs, convictions, ideas, feelings, opinions, and/or strategies from Kuffars in order to further the cause Islam.

Kitman - is close to “taqiyya,” but rather than outright dissimulation, it consists in telling only a part of the truth, with “mental reservation” justifying the omission of the rest.

Taqiyya was historically used by Shi'ites to avoid persecution by Sunnis. Now both Sunni and Shia Muslims use Taqiyya and Kitman to deceive Kuffars as to the nature of Islamism.

Stephen Gash
Europeans are saying "Enough is enough, no Sharia here." So join the call, attend the demonstration IN lONDON. If you love your country and value your freedom, be there on 26th OCTOBER, 2007.

In case you don't believe Islamists want to take your freedom